The 2 words that will increase your savings 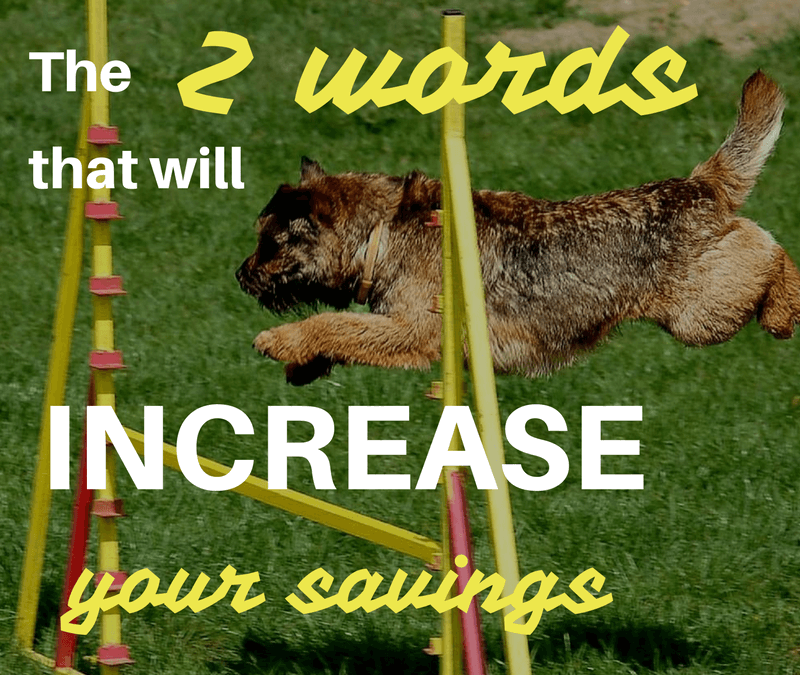 I could sum up this entire post in two words. To give them context, first I’m going to tell you a little story.

Once upon a time

Once upon a time (earlier today) I found myself feeling incredibly stressed out. My laptop had been in and out of the repair shop for a month before even the repair guys gave up on it. A new one was on the way but hadn’t arrived yet, and my digital life was in shambles. My lovely new apartment was a mess, with some furniture having not arrived yet, other furniture needing to be moved around, and still more furniture needing to be repaired. On top of that, there was just stuff everywhere, sitting out because I hadn’t found time to figure out where to keep it yet. I had a long list of things I needed to do, but I had been out at meetings a lot later than I’d expected, and I was getting home just in time for dinner, having not even started anything on the day’s long list. Plus, I had a million little things that I could barely keep track of – my to do list was growing faster than I could even write things down. Finally, to top it all off, there was an odd smell in my apartment and I couldn’t figure out where it was coming from (not the fridge or the trash, so what on earth….?) It was Just. Too. MUCH!

So I did what many of us do: I ignored it. Well, I tried to anyway. It didn’t go very well. I could still feel the weight of everything pressing down on me. I was still stressed out. It wasn’t working.

That’s when I did something. It was a small thing, but it was something. When I was spinning in circles and didn’t know how to take control of things, sitting down to do one small thing felt liberating. Look Mom, I was making progress! I was in control. I was confident. Most excitingly, I was finally crossing something off of my too-long to do list.

It’s the same with finances.

When the bills are stacking up, the last thing you want to do is look at them, and certainly not think about them. And you definitely don’t want to add them up, amiright? It’s so much easier to walk away. But they’re still there, nagging at the back of your brain, weighing you down. You can walk away, but you know they’re still there, and that knowledge is impossible to escape. We try and fail. So why do we keep trying?

Because it’s easier than facing the thing we really, truly don’t want to face.

It can. At least, the negative feelings can.

The first thing I do with all of my clients do is to write down their goals. This is easy and fun. The second thing is to figure out where they stand financially. What do they own and what do they owe? How much are they earning and spending? This is the part everyone wants to avoid. It can be literally painful. It’s often uncomfortable. But afterwards, they feel something unexpected.

I’m not suggesting that figuring out where you stand always gives you positive answers. It doesn’t. Knowing that you are $50,000 in debt sucks big time. So why is it freeing? Because what’s in our heads is almost always worse than the reality. And because once you know you owe $50,000, you can create a plan to get rid of it. It has become concrete instead of some nebulous concept.

The other reason is because you’ve taken action. Taking action is freeing. You get an adrenaline boost by making progress. In a sense, you’re crossing something off your list.

Give it a try. Consider how you’re feeling about your financial situation right now. Then use this calculator to figure out your net worth. Afterwards, check in on your feelings again. Have they improved?

It’s not just about your net worth, either. Maybe you’ve procrastinated tracking your expenses. It sounds boring and annoying and mostly like something that will give you answers you don’t want to know. But once you start doing it, you will see that it gives you useful data that you can use to make great progress. You’ll find it’s not that difficult or annoying after all. And you’ll even discover that it’s helpful.

Or it could be that you have been procrastinating on selling those old smartphones that are sitting in a drawer. You don’t want to bother with it. You don’t have time. But you decide to take an hour and just do it. You download 3 selling apps on your phone, put up some posts there and on eBay and Craigslist, and then go on with your day. Soon you get messages that the phones are selling. You put them in envelopes, mail them out, and watch the money roll in. All because you took less than an hour to post some photos of old phones.

Now, I promised you 2 words that would lead to increased savings, so here they are: Do Something. Or better yet, Take Action.

That’s it. It’s deceptively simple, actually. You don’t have to do anything big, just something small. Pick a post at random from this blog and do what it suggests. Take action on a tip from your favorite personal finance book, blog, or podcast. Try that thing that worked so well for your 4 best friends. Just do something. 1 thing.

Not sure where to start? Here are a few ideas:

Do something. Take action. It’s that simple.

This probably won’t make you rich. I mean, it could, but it probably won’t. But it will get you on the right path. Do you know what you need before you have $1,000,000? You need $1. You can’t have a million without one, right? Get that first dollar, then make it $10, then $100, then $500. Start small, watch it add up, and enjoy the feeling of lightness you get from taking action.