How you might be in debt and not even know it 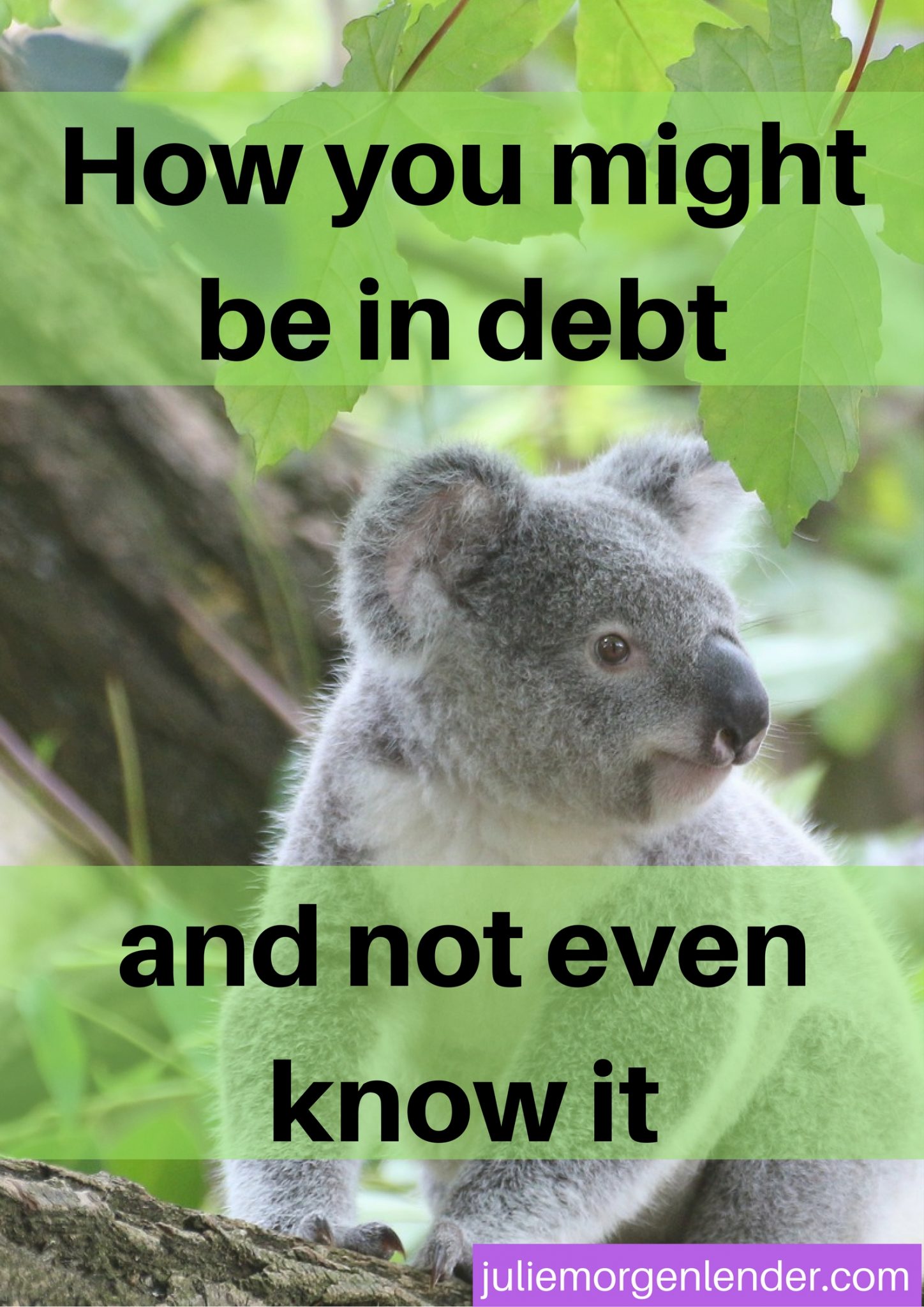 I get so worried every time I talk to someone who doesn’t realize that they’re actually in debt. It’s not their fault. It’s not your fault, if you don’t know. This is a concept everyone should be taught in school but it’s often passed over. So let’s fill in that gap right now.

What is debt REALLY?

Debt is owing money or something else to a person or entity.

This sounds so simple. You either owe something or you don’t. But there are a lot of gray areas to this. If you receive a bill with a total of $3000 and a minimum payment of $100 and you make the minimum payment, are you in debt? And if so, by how much? That’s very important and it’s usually glossed over. We won’t be glossing over it today.

What counts as debt?

I’ve heard many people say “that doesn’t count.” The thing is, you don’t get to choose what counts as debt – the people or businesses you owe money to get to decide. If you owe them money, then it’s debt.

That last one is especially tricky, and we’ll go over that in a moment.

You might also be saying, that loan wasn’t your “fault.” This isn’t about fault or blame. Maybe you’re paying off someone else’s mistake. Maybe you got really sick and you’ve got a lot of medical debt to pay off. That sucks. I feel for you, because those are lousy situations to be in. And I’m not blaming you. I’m simply stating the fact that it’s debt. It counts.

Here’s the most common place I hear people say they’re not in debt when they really are. Let’s say you get your credit card bill in the mail. You owe a few thousand dollars, but this month you pay the minimum balance, like you always do. You know you’re not in debt because you always pay those minimum balances on time, just like they want you to. There’s no stress, no collection agencies, no problems at all.

Except there is a problem. You owe more than you’re paying. And the credit card companies expect you to do that; it’s how they make their money. If you owe $3000 and just pay $100 this month, guess what? Next month you’ll owe whatever you spend in the following 30 days and the $2900 and a high interest rate on that $2900.

Those interest rates add up fast! If you have $3000 on a credit card at 15.99% interest and you only make minimum payments, then even if you don’t spend any more money on that credit card it will take you more than 20 years to pay off that original $3000 plus more than $3600 in interest.

That’s right, you’ll spend more in interest than the original cost of the items you bought! And in the meantime, you’ll be carrying that debt. To understand why it takes so long to pay off the balance, check out What happens when you buy $1000 of llamas on a credit card.

Who are you paying?

Let’s be sure about this. Look at your credit card bills. Look at your debit card statements. Check your bank accounts. Is there anyone you’re paying every single month? There are probably more than a few.

If you’re paying those same bills for past months because you didn’t pay them on time originally, it’s debt.

Why debt is a problem

It’s tempting to say it’s no big deal. You’re making the minimum payments so everyone is happy. But there are a few reasons why debt isn’t so great.

First, it can mess with your credit score. And you need good credit when you rent an apartment, apply for a mortgage, or apply for a new credit card. (It can also help your credit score if you carry and pay off debt in certain ratios, but that’s a complicated topic for another day.)

Second, there’s the psychological impact of being in debt to others. Often we don’t even recognize that impact until it’s gone. When it disappears, suddenly the weight is lifted and we feel such freedom! When you’re in debt, you’re denying yourself that freedom.

Third, there’s the part that often gets overlooked: monthly payments. It’s easy to pay hundreds or even thousands of dollars towards debts every month. That means you need to earn even more money than you would otherwise. If you lose your job, you could be in trouble. If you quit, you could be in trouble. If you become ill and can’t work, you’re in trouble. It weighs you down. It controls you. When you feel like you can’t make ends meet every month, imagine how you’d be doing if you didn’t have those monthly debt payments. Things would probably be a lot more manageable.

Finally, there’s all of the money you lose. It’s easy to pay thousands of dollars or more in interest rates. Check out the llama article above to fully understand this. The basic idea is: wouldn’t you rather put those thousands of dollars of interest towards a house, travel, or new clothes instead of handing it over to the credit card company? Remember: interest payments are not your friend.

The first step to dealing with newly discovered debt

If you just realized that you’re in debt, it can be difficult to absorb. But don’t panic! There’s something you can do: you can get out of debt.

First things first: stop making more debt. This might not happen immediately, but figure out a way to make it happen as soon as possible. You want to decrease your debt, not increase it. This means you need to be spending less than you earn. Find a way to make it happen. Look at the categories on the right side of this page and click on “increasing income” and “lowering expenses” to get some ideas.

The debt has to go. Make a list of your debts. It can be this simple:

When that debt is gone, you’ll throw everything you can at the next smallest debt. Eventually they’ll all be paid off.

Paying off your debts could take days or decades, depending on how much debt you have, how much effort you put into getting rid of it, etc. Once it’s gone, don’t let it come back! Make sure you always spend less than you earn, and save the difference.

As long as you spend less than you earn and you have enough savings to cover emergencies, you’ll never be in debt again.*

Those last few paragraphs made paying off debt seem really easy. The truth is, it’s straightforward and it’s simple, but it’s not easy.

If you just realized today that you’re in debt and you want to get rid of it, then it’s important to understand you’ll be putting in a lot of effort, and that effort will be worth it. You won’t get sculpted muscles without working out, you won’t become a professional musician without rehearsing, and you won’t pay off debt without changing your earning and spending habits.

But the key is that you can do it. I believe in you! Look at those debts of yours, make a plan, and see how fast you can pay them off. Because it’s time to live debt-free!

Are you in debt?

Before you clicked this today, you thought you knew if you were in debt or not. Now that you’ve read this far, what do you think? If you’re not sure, use my Easy Net Worth Calculator to figure it out by entering your email in the box and clicking “submit”. When you get the Easy Net Worth Calculator, you’ll just fill in some info, and the calculator will instantly tell you your net worth. If it’s below zero, you’re in debt. If it’s above zero, you’re not. You’ll know right away and, if you’re in debt, you now know what to do about it!

*Obviously there are always exceptions. I make no guarantees, especially when it comes to emergency situations. See this site’s Disclaimer.