The good, the bad, and the scary of comparisonitis 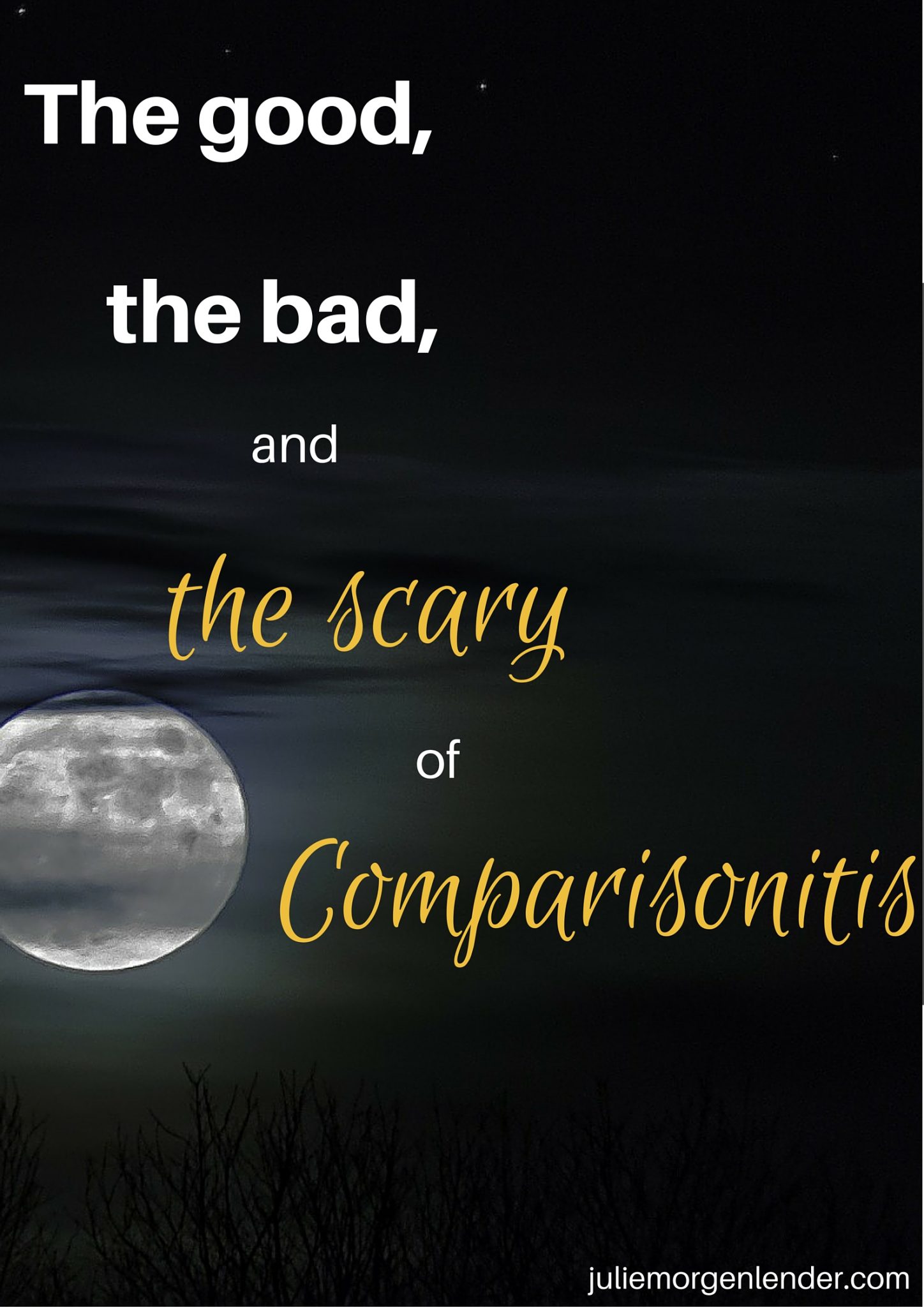 I get some version of the comparisonitis question from every client I meet with. Sometimes it’s, “I bet I’m the worse case you’ve seen” and sometimes it’s “How do your other clients do with this?” but it always comes down to: “How to I compare to everyone else?”

It’s human nature, really. When we’re babies our height and weight are measured in comparison to our peers. In school we compare our grades to others’, and sometimes we’re even graded on a curve. We compete in art and music and sports. So it’s no surprise that we do the same type of comparing when it comes to finances. The problem is, it doesn’t work.

You’re not the same as them

You can see where I’m going with this. It’s natural to want to fit into the crowd (although you’ll soon see why you shouldn’t be aiming for that in this case.) The thing is, there are so many variables that you just won’t have the same situation as anyone else. And that’s a good thing.

Your situation is unique, you are unique, so use that to your advantage! Come up with a plan that works perfectly for you!

Most people want to do better than average, and it’s no different with money. The problem is, if you know you’re doing better it’s easy to get complacent.

Let’s say you want to buy a new car in 3 years for $20,000. A friend has the same goal. You’ve saved up $10,000 already and your friend hasn’t started saving at all. You feel like you’re ahead of things! There’s no need to rush now. After all, you already have half of what you need and you still have 3 years to go! So it’s pretty easy to save a bit less for the car and spend the money on something else instead. The problem is, you’d planned to save $3500 per year, and if you slow down your savings now, you won’t save enough in time.

Being ahead of the pack is great, but make sure it doesn’t ruin your drive to do even better!

At first it can be a comfort to know you’re behind. When clients say, “I bet I’m the worst case you’ve seen,” it’s because they want to think it can’t get any worse. They want to think that one day they’ll be one of those “better” cases. The problem with being behind the herd is that it’s easy to get discouraged.

If you’re the friend from above who hasn’t saved anything for your new car while your buddy has already saved $10k, you might feel spurred to put your ass in gear and save up really fast! Or you might get discouraged and give up.

Unfortunately, I’ve seen too many people give up. They look at where everyone else is and feel so discouraged that they forget to reach for their own, smaller, more immediate goals. Maybe you can’t get the $20k car in 3 years, but if you give up then you also won’t be able to get the older car for $10k in 5 years which you could totally do.

What’s worse than being last in the pack? Not being in the pack at all.

Sometimes being average is great. But if you’re living in the U.S. and talking about finances, you do NOT want to be average! Sure, maybe average is a step up from where you are now. It’s a fine short term goal to aim for. But it’s not what you should aim for in the long term.

You could do a quick Google search to find out the average cash savings and net worth in your country. But what would that get you? Nothing. Ignore it! Instead, focus on you. What are your goals? Why do you have those goals? Set goals that make sense for you and reach them! Then you won’t have to worry about anyone else. Because if you’re happy, why does anyone else’s position matter?

But like I said above, it’s human nature to want to compare. So if you really feel the need to compare, compare the you of today to the you of the past and of the future. Calculate your net worth right now (use my free net worth calculator if you want.) Then do it again next month, and the month after that, and the month after that. Soon you’ll be able to look back at past net worths and see if your number is rising. You can do the same for your savings rate, for your income, for your expenses, and for anything else. Use this calculator and see if you can do better tomorrow than you did yesterday. There’s no better comparison if you want to see progress!

Sharing instead of comparing

Share this on Facebook, Twitter, etc. and see if others feel the same way. Instead of comparing how what you have, share your desire to do better. Motivate each other. Then use that motivation and shared desire to help you break free of the urge to compare. When you realize that everyone else is dealing with their own struggles and has different goals, you’ll realize how unique your own situation is – and why there’s no need to compare.