How this one question is breaking your budget 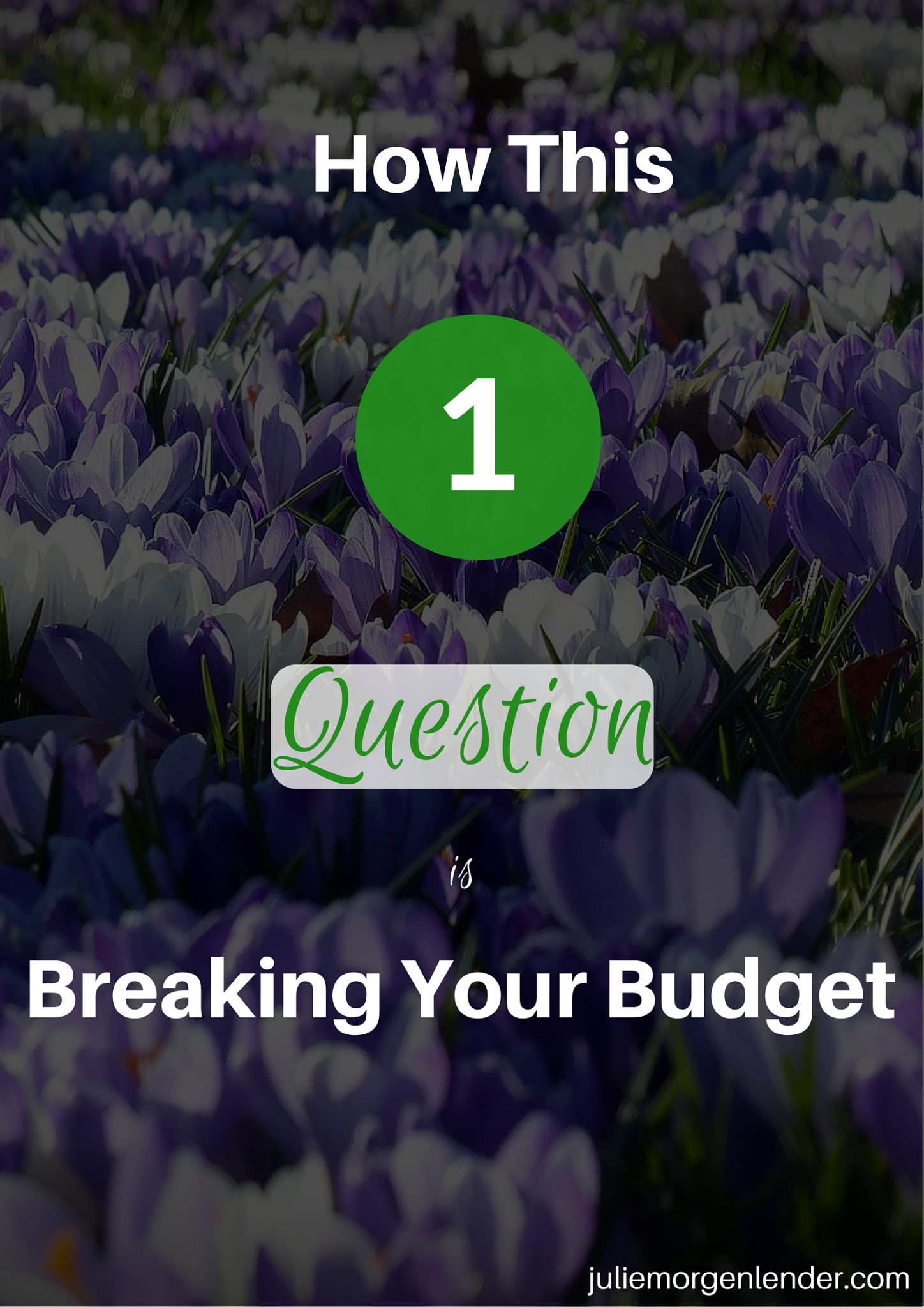 On it’s surface, there doesn’t seem to be anything wrong with the question: Should I? The problem is, asking it tends to set us up for failure.

Should I eat one more cookie?
Should I stay out a little later?
Should I buy that awesome thing?

Why is this a setup? Because we already know the answer. We know we shouldn’t, or else we wouldn’t even be asking ourselves the question. But we want to talk ourselves into it. Sure, later we might regret the decision, but right at this moment we aren’t thinking about our waistline or our budget or how horrible we’ll feel in the morning. No, we want the thing and we want to convince ourselves it’s ok.

Why Should I? doesn’t work

Willpower is difficult and exhausting. You know it. I know it. The kid who keeps asking Please please please? knows it. There’s no question about it. If we have to exert a whole lot of willpower, eventually we’ll get tired and just give in.

When we ask Should I? what we’re really asking is, Do I have the willpower to say no again? Think about all of your recent Should I’s? and I bet you’ll find that the vast majority are really I know I shouldn’t but can I really say no again?

By the time you ask this question, you’ve probably already made a whole lot of other decisions that day. You’ve decided what to wear, what to eat for breakfast, which route to take to avoid that traffic jam. You’ve decided which errands to run and which items to cross off your to-do list first. By the time you’re faced with whether or not to buy that cute sweater, you’re too tired of making decisions to have any energy left to say no. So you buy it, add it to the 2 dozen you already have at home, and in a few weeks it’s old news and you again feel like you have nothing to wear. But it sure seemed like a good idea at the time.

Stop before you start

The easiest way to make a smart decision is to not make a decision on the spot. I don’t think about what to eat for breakfast every morning. I have two breakfast options and I alternate between the two. If today is an oatmeal day, then I eat oatmeal. I don’t have to think about it. That takes away one decision from the long list I make every day. It means I’ll have more willpower stored up to use later. It means I’ll eat a healthy breakfast. And mostly for me it means less effort in the mornings, when I’m really not at my sharpest.

Diets have been the same for me. I can’t just “cut back” on sweets. Nope, it totally doesn’t work because that’s not well defined. When I try to “cut back” I constantly ask myself, Should I have one more cookie? I figure one more won’t hurt. And that’s how I end up eating a lot more. Instead, I’ve changed it to “no sweets after 4pm.” That’s it. No exceptions whatsoever. And you know what? It works! Because I know there are no exceptions to the rule, I never wonder whether I can or should eat one more cookie. I know I won’t. There’s no decision to be made on the spot because I made the decision a year ago.

Budgets are the same way. Set a rule and that’s the end. Like oatmeal every morning or wearing the same jacket every day, setting a budget rule means you don’t have to exert willpower. You’ve already made the decision!

Everyone’s budget rules will be different. Find something that works for you. You can adjust it later, but never on the spot. Changes can only be made during your weekly or monthly money reviews, when you’re thinking clearly and you’re not feeling tired and emotional about the thing you’re considering.

Let’s say you want to want to spend less money on eating out. Your rule might be that you no longer order appetizers or desserts, only main courses. Or your rule might be that you don’t eat out for lunch, only for dinner. Or it could be that you don’t eat out on Tuesdays, Thursdays, or Sundays. Pick a rule that works for you and then you only have one job: follow it, without exception. None. You will not eat out on Thursday. It doesn’t matter how much you’re tempted, you know it’s just not an option.

Or maybe your rule is to spend less money on gas. So you decide you won’t drive for single errands, you’ll combine errands instead. Or you won’t drive anyplace that’s within 2 miles of your home. Or you’ll ride your bike to work every Monday, Wednesday, and Friday. Pick something and stick to it without exception. It doesn’t matter if you’re tired or if it’s raining. Today is Wednesday so you’re riding your bike to work. No exceptions!

You might want to try one of my rules: not buying anything at the grocery store unless it’s on my shopping list. It’s surprising how that can cut down on both the bill and on wasted food!

Make sure your rules are reasonable for you. Notice that I didn’t cut out all sweets. And I didn’t suggest you stop eating out 100% or that you never drive again. Give yourself some of the thing you’re considering, just keep it limited to an amount you’re happy with.

The benefit that may surprise you

There’s one benefit to all of this that I didn’t expect. Sure, eating fewer sweets is better for my health. Yeah, spending less money is great for my nest egg. But the part I never expected was the freedom! Yup, you read that right: freedom!

Choose 1 Should I? question that you ask yourself a lot and make a rule right now on how you will resolve that question from now on. After today, you shouldn’t be asking yourself that specific question anymore! When you’ve gotten the hang of that, you can make even more. Which question will you eliminate first? Please share in the comments and we can all help each other figure out rules that make sense!

Are you wondering how much you might save? Use this calculator to see how these changes might add up big time!