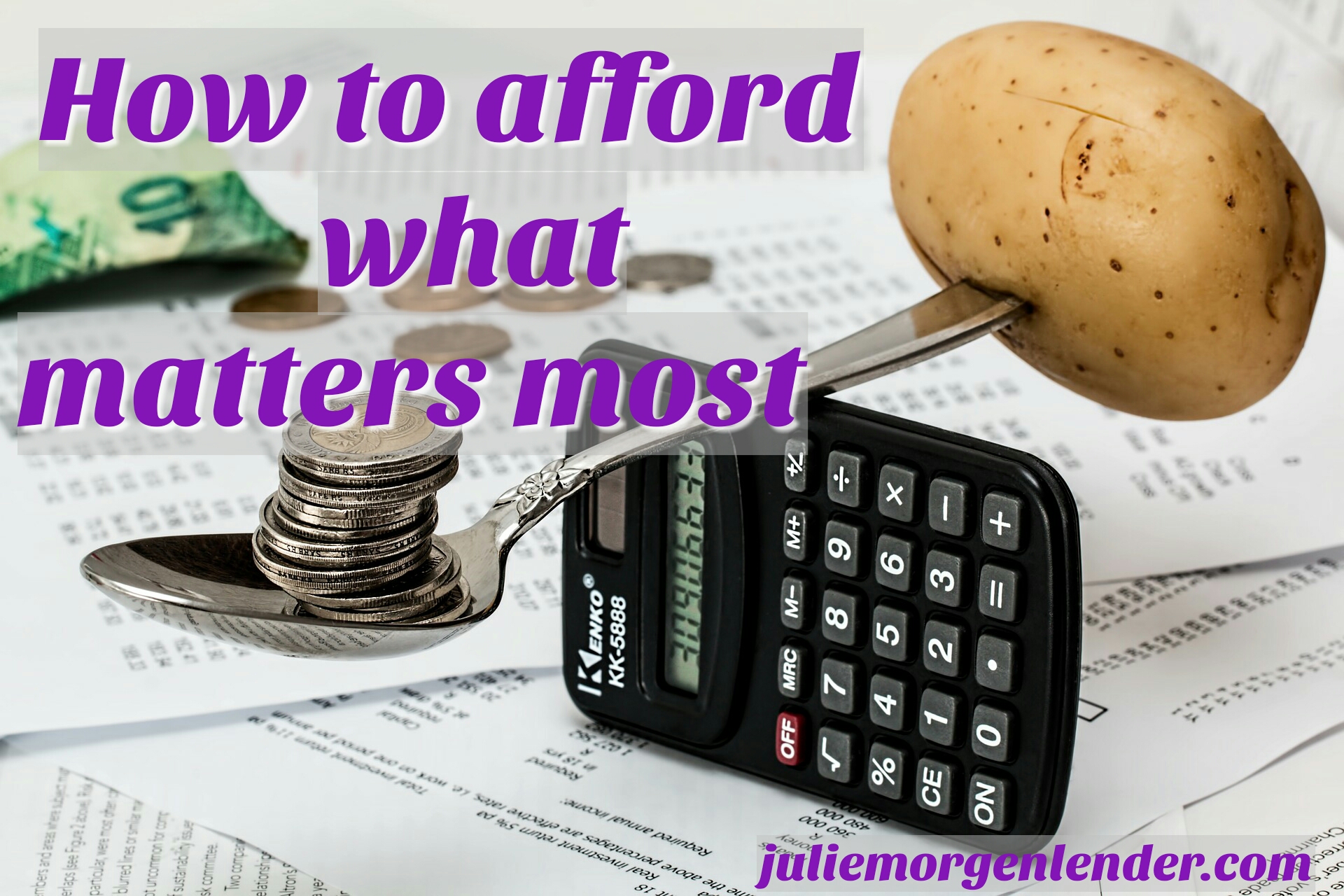 One day I started thinking about why I said “I can’t afford it” when someone mentioned a thing that really, I could afford if I wanted to badly enough. I had a good job with a reasonable (though not amazing) salary. I had good savings. We weren’t talking about a private jet, but something reasonable, like dinner at a slightly more expensive restaurant or more expensive clothes. I had the money, so why did I use that phrase, “I can’t afford it”? And what do other people mean when they say it?

I think people usually mean one of three things when they say “I can’t afford that.” Which one are you? Which one was I?

1) I can just barely cover my most basic expenses. If I spend money on that, I won’t be able to pay for something else and still break even.

This seems to be the least common meaning, but it happens, and maybe it’s you. This is when your income covers only your most basic expenses: food, shelter, etc. You pay the rent, you buy food, maybe you replace that pair of sneakers with the holes in them, and then you have no money left at the end of the month.

You can’t afford that dinner out or new bike because you literally don’t have any money left. Spending more would put you into debt. You truly can’t afford it.

2) I’m already not covering my basic expenses now. If I pay for that, I’ll go into more debt (or have to take more out of my savings.)

This is similar to #1. You’re paying for only basic expenses, but you don’t have enough income to cover them. Maybe you’re out of work. Maybe your job doesn’t pay enough. Maybe your rent suddenly went up and you don’t know how to cover it.

You’re paying for things now by putting money on a credit card you can’t pay off or by taking money out of your savings. Every penny you spend just makes the problem worse, so going out the movies or buying a new phone is out of the question. You just can’t afford it.

3) I have money to spare, but I want to put it towards something else.

Ah hah, this is the bucket many of us are in. It’s the one I was in. This is where you have money to spend, but you’re choosing to spend it someplace else. Maybe you’re not even aware that you’re making that choice, so when you say, “I can’t afford it” you believe you can’t afford it.

For me, when I said “I can’t afford it” I meant “I can’t afford to spend money on that and on these other things and put money into savings.” Sure, I could have stopped contributing to my retirement account and gone to those concerts. I could have moved to a cheaper apartment and gone out to dinner more. I didn’t want to. Those were the choices I made, even though I wasn’t thinking of them as choices at the time.

If only I’d thought about it that way, I might have put even more into savings!

There’s nothing wrong with these choices themselves. The problem is that it’s easy to not realize these are choices we’re making. When you’re in the middle of it, you don’t always realize it. I didn’t.

How to “afford” the things you want most

The next time you think to yourself, “I can’t afford that” ask yourself, do you want to afford it? If you don’t really care, then forget about it. But if you do want to have the ability to spend money on that thing, then it’s time to make it happen.

If you’re in one of the first two categories, you need to find a way to earn more income. There’s no way around that. If you’re in the third and you’ve ruled out adding income, then read on….

Remember, there are exactly 3 ways to have the money for that thing.

If you don’t feel you have any money free to spend on the thingamajig you want, and you don’t want to earn more money, then you need to take the money from someplace else that you’re currently spending it. It’s time to cut back on something.

Notice that I didn’t say to cut something out entirely. Maybe you will, but often just cutting back part way will do the trick.

What do you spend your money on?

Grab your credit card and debit card statements from the last few months. Write down everything you spent money on and the amounts. You don’t have to be super specific, just make categories that make sense to you (groceries, vacations, car, clothes, hobbies, meals out, electricity, rent, etc.) Put each transaction into one of those categories, then add up each category.

Example: If your cable bill is $150 and you almost never watch tv, cancel cable.
Example: If you spend $800 on groceries for just yourself, find a way to cut that back by 30% to start.

Check out this calculator to see just where your money is going and how it’s affecting your bottom line:

What do you want most?

Every time you’re about to spend money, ask yourself, “What do I want most?” If the answer is that you most want the thingamajig you’ve been trying to “afford” then put the money towards that instead. If what you want most is the thing in front of you, then go for it.

Set aside the dough

It’s one thing to not spend money on something because you’re saving for something else, but what happens when you go to your checking account and the money still isn’t there? It’s easy to accidentally spend it on a lunch here and a book there without really noticing it. What can you do?

Open a separate savings account and put the money for your thingamajig in there. That way you can’t accidentally spend it. If you’re using a debit card, then the money simple won’t be in your checking account to spend.

If you use a credit card and you spend more than you want, then you shouldn’t be using a credit card. Cut that sucker up before it causes serious damage!

Do you still want to afford it?

You should be reviewing your income and expenses regularly. You should also be asking yourself, “What do I want most?” It’s important to check in with yourself from time to time to be sure your money is going where you want it to. Don’t gloss over this. Give it some serious thought. What you most want will change over time and you need to give yourself the chance to recognize that.

After all, the best way to afford what you want, is to not spend money on what you don’t want.

The best way to afford what you want, is to not spend money on what you don’t want.

Which category do you fit into? What do you mean when you say you “can’t afford” something? Comment below and offer your 2 cents!